Back to hiatus in a moment, but first, I couldn't resist passing along this pic that my good friend jules took at the Netroots Nation thing in Austin this past weekend. I've been busy and haven't been following the mainstream media coverage of NN, but if this is any indication, it has indeed been wankeriffic. Anyway, I really like this photo, and not just because I like and admire all four of the people on the panel: (from left) digby, Rick Perlstein, The Krugmeister, and Atrios. (Click the photo for LARGE version, in which you can clearly see that at least two of the panelists are, gasp, wearing sandals.) 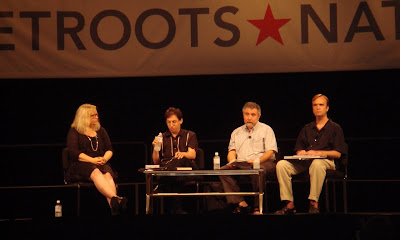 "Turn left at Greenland."
Hmm, the five-pointed reddish star seems to be over Krugman. That would probably mean something—if I were a Freeper or a Malkinoid. Anyway, back to obscurity. Thanks again, jules, and see y'all later.

So the other day I was perusing the introduction to Project Gutenberg's version of Leibniz's Theodicy and I came across this line:

At the point of Louis XIV's highest success, the Protestant princes had no hope but in Catholic Austria, and Austria was distracted by Turkish pressure in the rear.

Was I wrong to burst out laughing? Discuss.

Sorry, I've been meaning to post a note, though you've probably figured this out already from the eerie quiet: Categorical Aperitif is on hiatus for a little while, probably until early August. I'm busy and tired and just don't have the spirit right now, even for Daily Random Flickr Blogging. If the universe cooperates, I'll see y'all in August. During the meanwhile, read Michael Lind on Jesse Helms's America (it's not dead yet), watch Joe Cocker with subtitles (a marvelous little YouTube), and listen to Les Barker's advice for George W. Bush (MP3). 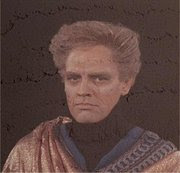 "Well, you tell this Brian Setzer that he can't have his hair back unless he is of the Body, thank you very much."
// posted by nash @ 4:38 PM 1 comments