God so loved the world that he gave it Johann Sebastian Bach: 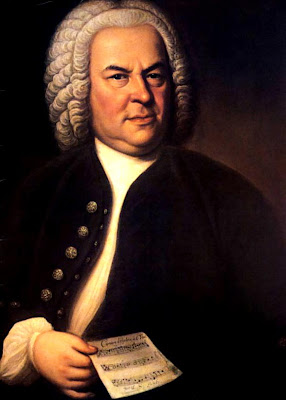 "Take this, brother; may it serve you well."
...who in turn went on to do more for belief in God than entire armies of bibliolaters ever could.

To honor the occasion, here is "Voyager" from one—or should I say thirty-two?—of my favorite films, Thirty-two Short Films about Glenn Gould. (Where is the Ed Wood of our day to make Thirty-two Short Films about Glen or Glenda Gould, I wonder?) Bach has several compositions speeding off into interstellar space on the Voyager Golden Records; one is a prelude and fugue from the Well-Tempered Clavier, as performed by Gould. I don't know that our species could ask for better ambassadors.

Anyone who's swallowed rat poison or eaten at Arby's or something and needs to induce vomiting could do worse than to check out "Iraq and the Media: A Critical Timeline," another invaluable service from the good folks at FAIR. Even if your stomach is empty, this lengthy overview of the media's performance in 2002-3 will make you wretch spiritually. Who can forget such golden oldies as this?

February 25, 2003 —MSNBC cancels Donahue, its top-rated show and a rare oasis of war skepticism in the mainstream media. An internal NBC report surfaces (All Your TV) that describes him as "a difficult public face for NBC in a time of war." The report worries that his show could become "a home for the liberal antiwar agenda at the same time that our competitors are waving the flag at every opportunity."

—The Chicago Tribune reports on pro-war rallies organized by radio giant Clear Channel: "In a move that has raised eyebrows in some legal and journalistic circles, Clear Channel radio stations in Atlanta, Cleveland, San Antonio, Cincinnati and other cities have sponsored rallies attended by up to 20,000 people. The events have served as a loud rebuttal to the more numerous but generally smaller anti-war rallies." The piece goes on to note that Clear Channel's rallies "are the idea of Glenn Beck, a Philadelphia talk show host whose program is syndicated by Premier Radio Networks, a Clear Channel subsidiary." In 2006, Beck would be rewarded for his efforts with a nightly show on CNN Headline News.

—NBC's Matt Lauer explains the multi-million-dollar press briefing room in Qatar "is all to help the US military make sure they get their side of the story out because their fear, of course, is, Tom, that Iraq will distort the story and turn public opinion against the United States, the coalition forces."

Ah, Glenn Beck. Those few moments on his knees down at the crossroads sure paid off big for him, huh?

Read it all. But keep a bucket handy when you do.

A Prayer from Hugo Chavez

I still worry that Hugo Chavez will turn into the pseudo-Marxist autocrat which he is automatically, unthinkingly caricatured as by the Bush Administration and much of the dutiful corporate media (all while he has won free elections, Venezuela has a powerful opposition media, and the U.S. government and elite media were complicit themselves in an antidemocratic coup attempt against him a few years ago), but in the meantime, I can't help but like the guy. Democracy Now! was kind enough to give us some excerpts from one of the speeches he's done as he's followed Bush around Latin America during the past week:

PRESIDENT HUGO CHAVEZ: [translated] On the other side of the river, that is where that little gentleman of the North must be. Let's give him a big boo! Gringo, go home!

I am convinced that our friends in Brasilia and in Montevideo are not going to feel offended, because we would not want to hurt any of our brethren from Uruguay or Brazil. We recognize their sovereignty. We recognize that those governments have the sovereign right to invite the little gentleman of the North, if they so choose.

But Kirchner and I don't need to plan anything to sabotage this visit, because we are witnessing the true political cadaver. The President of the United States is a political cadaver. He doesn't even smell of sulfur anymore. He doesn't even smell of sulfur or brimstone, if you will. No longer. What you smell from him now is the stench of political death. And not long from now, he will turn to dust and disappear.

Classes, family, and automobile willing, I'll be back tomorrow with some long-delayed Random Flickr Blogging and/or some Live Celtic Softcore Blogging (our local PBS affiliate just can't seem to give us enough of these winsome Stepford lasses, I swear). Courage.

...knocks one right out of the freaking park.

"You see what you did there? The logic trap you fell into? You're thinking of Dick Cheney as some kind of...person."

"John. No human being could simulaneously contain so many self-negating ideas without suffering some sort of brain injury—or heart attacks. Even multiple heart attacks."

"Vice President Dick Cheney is a fleet of cyborgs stationed around the world in vacuum-sealed pods every 15th line of latitude. He—or should I say, they—is a technological marvel. And each replicant is programmed differently. The Cheney XR-7 is programmed to convince us that we are safer and winning the war on terror, while the Cheney-VR Turbo will stop at nothing to keep us in a perpetual state of submissive fear. The Cheney-BF 3000 loves his lesbian daughter, but John, do not get her near the Dick Cheney Omega-8: he thinks she's an abomination."

I can post twice in a month. I can.

I'm really sorry, folks, but between teaching, tutoring, grading papers, and relative matters, I have been swamped. The good news is that I'm not as depressed as I'd thought I'd be right now because my first big batch of student papers has been better than expected: some of these people can actually write coherent, informed essays, and do so with some style and grace to boot. I may even not want to shoot myself by the end of this semester. Anyway, I think I'm approaching the end of a tunnel. I might even get to do a decent batch of Random Flickr Blogging next week.

I know that posting videos is something of a blogging cop-out, but what the hell; I've been wanting to try this YouTube embedding thing. A little while ago, through E&P, I found out that Richard Thompson has written an Iraq war song—and it's a humdinger:

Richard Thompson Bonus Track! Here's a nifty, intimate little performance of "1952 Vincent Black Lightning," a song which I think is just unspeakably great. I've heard several different Thompson versions of it, the bluegrass version by Del McCoury, and other versions I can't recall, and every single time it just reaches right inside me, grabs my heart, squeezes a cathartic mix of curiosity, amusement, concern, sadness, grief, awe, and wonder out of it, and then mercifully lets it start beating again. This song does more in a handful of stanzas than most songs do...ever.

See y'all next week, I hope.