I'll See Your 7 Facts and Raise You 9 Paradoxes

Hey, Generik: if you liked Michael Schwartz's "7 Facts Making Sense of Our Iraqi Disaster," you'll love his "9 Paradoxes of a Lost War."

(Thanks for the hat-tip, by the way. Anybody out there who hasn't should definitely drop by Generik's place—he has some truly awesome Paris photos on display. Lucky bastard.)

When a young St. Paul boy got to pick the theme for his third birthday party, he didn't pick Nemo or the Wiggles or Dora the Explorer. He didn't even pick his favorite sports team.

"I think most kids get their favorite show for their birthday party theme," Jennifer Schally said.

Henry's father, Troy Schally, explained he and his wife have watched the show during dinner since their son was an infant. He believes the show's distinctive theme caught his son's attention.

Or perhaps it was the dark allure of Jim Lehrer's soulless, cockroach-colored eyes. 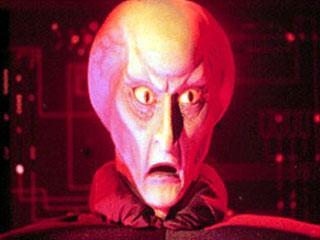 "Looking into them reminds me of something Nietzsche said: 'And when you gaze long into an abyss, the abyss gazes also into you', Brit."
Oh, Henry. Perhaps when you get older, you'll ask for a FAIR-themed party instead. C'mon: be the first kid on your block—hell, the first kid anywhere, probably—to dress up as Noam Chomsky for Halloween. Mind you, your local TV station won't cover that, but it would still be cool.

(I'm still wrestling with computer problems, so no Random Flickr Blogging again this week. In fact, I just popped in to share this bit of weirdness. Be back later this week, hopefully.)

A little while back I mentioned Tom Engelhardt's advice on "Reading the Imperial Press Back to Front"; here's the key TomDispatch passage again, with elucidating example this time:

I've always claimed that, when you read articles in the imperial press, the best way -- and I'm only half-kidding -- is back to front. Your basic front-page stories, as on the TV news, usually don't differ that much from paper to paper. It's when you get toward the ends of pieces that they really get interesting. Maybe because reporters and editors sense that nobody's paying attention but the news junkies, so things get much looser. You find tidbits the reporter's slipped in that just fall outside the frame of the expectable. That's what I go looking for. Sometimes it's like glimpsing coming attractions.

Here are a couple of tidbits I picked up deep in the Times recently.

There was an interesting front-page piece by Sabrina Tavernisi, "As Death Stalks Iraq: Middle Class Exodus Begins." After the jump, pretty deep inside, there's this line: "In all, 312 trash workers have been killed in Baghdad in the past six months." There it is: basic, good reporting that no one's going to notice or pick-up on. And yet it probably tells you just about everything you need to know about life in Baghdad today. Forget the security forces, forget top officials. Three hundred and twelve garbage men slaughtered. Holy Toledo!

That was from May (the Tavernisi anecdote) and June (the Engelhardt interview). Lo and behold, from Today's Papers today we find that the Times has finally moved the perilous calling of Baghdad garbagemen from the back pages to the front page—and updated the ghastly numbers:

BAGHDAD, Oct. 12 — Sabah al-Atia sometimes calls home every 10 minutes when he is working to let his wife know he is still alive. After all, his job is one of the most dangerous in the city.

Mr. Atia is a trash collector.

In a city where a bomb could be lurking beneath any heap of refuse, and where insurgents are willing to kill to prevent them from being discovered, an occupation that pays only a few dollars a day has become one of the deadliest. Most of the 500 municipal workers who have been killed here since 2005 have been trash collectors, said Naeem al-Kaabi, the city’s deputy mayor.

The article describes streets lined with piles of stinking garbage. Is it too late for the Bush boosters to dub them "Freedom Piles"?

I'm not sure, but I'll consider it a hopeful sign that the Times has decided to focus front-page attention on what was once a marginalized fact. What the hell; it's been a rough week, and I could use a hopeful sign just now.

Speaking of the imperial press: Y'know where I would have been last night, if I lived in or near New York? Carousing with fine folks like Jeff Cohen, Barbara Ehrenreich, Lewis Lapham, Tom Tomorrow, and Barry Crimmins at FAIR's 20th Anniversary Party. Here's a belated birthday salute to the fine people of FAIR. Media Matters gets a lot of the attention now (I'm sure the connection to evil overlord George Soros helps), but FAIR has been carrying on the good critical fight against the corporate/conservative media for two decades—and Lord knows how much they did to raise my consciousness during the last decade or so. I wish I could have been there to thank you all in person, FAIR, for all you've done for me and for America—judging by recent ratings (PDF), lots more people are finally listening to what you've been trying to tell them—but a cyberspace "Happy Birthday and Thank You!" will have to do.

See Under Plans, Best Laid, Mice and Men, of

I'm dealing with computer problems that have been temporarily assuaged and which will hopefully soon be fixed, but as a result, bang goes Random Flickr Blogging and some other posts I'd hoped to work up this week; meanwhile, though, here's some fun and/or timely reading to enjoy.

David Haglund has a nice piece on the underappreciated dark side of Jimmy Stewart:

It's no surprise, then, that when Stewart played George Bailey in Capra's masterpiece It's a Wonderful Life, the film was (and still is) misunderstood as a hymn to "the common man." Bailey is "not a common, ordinary yokel," the movie's villain declares. "He's an intelligent, smart, ambitious young man" who spends most of the film trying to escape his Podunk hometown. He wants to see the world, "Italy and Baghdad and Samarkand," and to "build things. Big things." His defining characteristic, in fact, is a revulsion at the ordinary, a (repeatedly suppressed) striving toward greatness. The failure to realize these ambitions drives him nearly to suicide.

Then he, like so many Stewart characters, has a vision, this time of a genial angel named Clarence. Clarence makes Bailey an outcast—as, in a sense, he'd always wanted to be—by showing him a world in which he'd never been born. This vision drives Bailey further into madness. "You're crazy," he tells Clarence. "And you're driving me crazy, too. I'm seeing things here." After he sees his mother, and she cruelly turns him away, not recognizing him, he runs up to Capra's camera with a look that not one of his contemporary male stars could have achieved. It's a more sinister version of Jefferson Smith's look when he first sees the Capitol dome, one of utter possession and derangement.

Michael Schwartz shares seven facts about Iraq that are worth knowing.

Paul Craig Roberts says that "President Bush and his neocon nazis have simultaneously lost two wars and America’s economic future." Lucky us; we hit the trifecta.

The secretary of the World League of Despots—aka Terry Jones—officially welcomes George W. Bush to despothood. (Ya gotta love how the Guardian describes Terry Jones: "Terry Jones is a film director, actor and Python." Back when Pythonesque made it into the Oxford English Dictionary, I remember thinking: Forget money; forget power; forget fame; forget celebrity; you know you've had an impact on the world when you become an adjective. I guess it works for nouns, too.)

Finally (this one's for jules): Eat curry, get smarter!

On Top of Other Things

I would just like to point that today is, in fact, the 37th anniversary of the debut broadcast of Monty Python's Flying Circus.